I was so excited to throw our Son’s first birthday party, he loves to watch Sesame Street at grandma’s house so I thought it would be the perfect theme for his first big bash! We would create the BEST Sesame Street party EVER!!

I began working on decorations, The dollar store was like my best friend for this party I found a ton of stuff  from a Sesame Street border, books for the goodie bags, stickers, wrapping paper and character cut-outs. I went crazy and bought anything and everything I thought I could use. The Dollar Store even had those popular tissue balls. The package included one tissue ball and then a paper folded round. I used the tissue paper balls to create character faces and used the paper rounds for my centerpieces to add some flair. Everything in the centerpieces were from the dollar store except the actual dollsI even painted a cardboard cutout for pictures, a cookie monster cookie toss game and even a small box for cards. I have to admit I spent many hours in my spare room with my hot glue gun, scissors  and paint brush creating sesame street pandemonium!

My younger brother made Stephan’s signs, luckily he works at my Dad’s print shop and they were able to create them, They made such a big impact and made things so much easier to decorate with the theme.

I didn’t want to do the normal candy bar so since we were having an indoors party we thought we would do an Ice-cream sundae bar! I dipped cones in chocolate and had all the fixings for a great sundae! There was one big hiccup when we bought the hot ice to keep the ice-cream cold we didn’t know if you place the ice on top then it will FREEZE to where is was like a rock!! It was the funniest thing ever… luckily it was still 100 degrees outside, we popped the tubs of icecream in our car for about 15 minutes and it was ready to go!

For the smash cake I decided to create it on my own. I found an inspiration on Pinterest and stayed up until 12 the day before making my little figures and trying to make it perfect for my little man. I also ordered cupcakes for WithLoveSweets. I have used WithLoveSweets in the past and the girl Valerie is just a doll to work with. I just give her the theme and she always makes them look so great and not to mention taste amazing! Andrea’s favorite is the blueberry and mine are the lemon. She is a great and even delivered so it made my life so much easier!!

We are so blessed to have such a big supportive family, Stephan is one lucky guy, and by the smile on his face you can tell he was soaking up the attention.  Thanks for everyone for coming and for anyone that helped. Special thanks to our Guillermo my best friend and Andrea for staying up with me the night before to finish up all the small details. Can’t wait until birthday number 2… Let’s hope it doesn’t come to fast!! 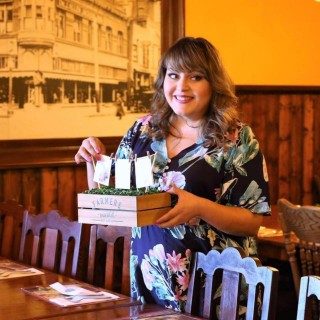 Fresno is where I call home and share my life with three of the most important people in my life, my beautiful wife, Andrea and two rambunctious boys, Stephan and Alec. I enjoy spending quality time with friends and extended family, taking road trips and camping by the beach. When I get a break from Mommy duty I love planning imaginative events and capturing beautiful moments with photography. I am the sole owner of Oh Happie Days and have dreams of opening a full studio one day (hopefully sooner than later)! I'm well known for my outlandish Halloween costumes and my ability to throw one heck of a party. I would love to chat with you about your next event or photography needs. How can I help create your happiness!?